Running “after the bike”…

When I first started writing this article I thought this would be interpreted literally by non –triathletes and I would get to see people running behind expensive bikes … But in this article I am referring to triathletes finishing the 3 leg of the triathlon the final push for the run.

Usually reserves are running low at T2 ( Transition 2, right after the end of the cycling ), the start of the run having expended enough energy on the swim and bike, allowing the athlete little margin for increased output. Running pure, as in with- out having any other sports done right before, is a different game. Running after swimming or biking is a different physiological and biomechanical process though, requiring a more in-depth analysis. On the bike triathletes are crouched in a forward position activating primarily the quadriceps and glutes and the hip flexors. Those muscle are contracting/relaxing at a rate of 80-90 times per min (assuming an RPM of 80-90 was held) making them fatigue up to a certain degree, and according to fitness levels. This is dependent also on the power output (measured in W) so if an athlete pushes with greater efforts the pedals to get faster, this increase in W corresponds to a higher energy output, leaving the athlete with a greater degree of fatigue in her legs. The more confined position on the bike can cause at times, and to certain athletes some stiffness, inhibiting their running technique, that opens up the torso and demonstrating a more vertical stance. 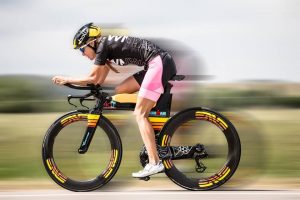 With running technique, the main task athletes are trying to achieve, is an effortless glide forward with -out too much pounding and braking with each footstep. Tired and stiff lower body muscles, tend to respond differently when it comes to grinding fast paces. It has been anecdotally reported that in some long distance triathlons the run after the bike becomes a fight for survival and an effort to minimize breakdown of form not running fast.

So what can one “poor”, tired and exhausted triathlete do to avoid this breakdown?

For starters pacing the swim and the bike is a good point to look into. If you are in doubt about your cycling output been too high or too low, then you are probably pushing too hard on the bike flirting with breakdown to occur. While on the bike, carefully select the intensity that will be implemented at all times. Varying the effort on the bike making it an “interval session” will reduce your ability to run fast after the bike, due to a quicker exhaustion.

Having plenty of “RUNAFTERBIKE” sessions, well spread- out in your months of prep, will develop the required adaptation of not breaking form, handling the run while fatigued and learning to cope. Scheduling sessions of easy running post- bike, or tempo runs after cycling, while teach you how to handle the breakdown, and make you consciously think of form. Plus it will create a more mentally strong triathlete tackling longer distances. Cycling as said before utilizes more quadriceps and gluteal muscles, and running more hamstrings and gastrocnemius muscles. Learning to quickly shift work to the activated muscles and having them perform at peak level, does not happen overnight. The shifting of blood-flow to running muscles is a process that needs a well-tuned rehearsal.  A good number of “RUNAFTERBIKE” sessions can probably improve concepts such as the economy of running, and rehearsing more often the “run tired”, situation reminding the athlete to keep good form, minimizing  breakdown. However too many of those sessions can be detrimental to the triathlete’s recovery and care must be given when scheduling them in. Also when practicing those “RUNAFTERBIKE” sessions attention is driven to the perfect form of running during execution. As some people say, practice does not make perfect, but perfect practice makes perfect.

*K.N. is an Exercise Physiologist, graduate of the University of Alabama, an ACSM certified Health & Fitness Instructor, holds an ITU  Level II Certification as a Triathlon Coach, and is a multiple Ironman & Half Ironman Triathlon finisher. He is coaching Triathletes online, teaches Functional Training at f/3dfts, and performs Exercise Physiology assessments at the Cyprus Sports & Research Center.    e – info@ryl.com

Fitness and training in covid-19 times

The intensity disciplined athlete. by K.N.*

The importance of having a training plan on hand, by K.N.*

For the runner in you, staying active in the summer

We use cookies to ensure that we give you the best experience on our website. If you continue to use this site we will assume that you are happy with it.Ok